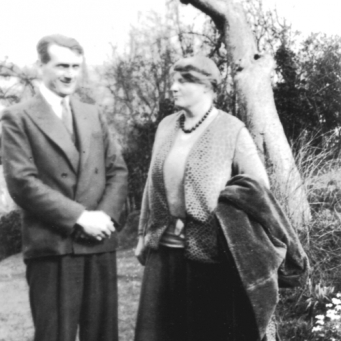 Are you having trouble sleeping? Do you have moments where you inexplicably feel afraid and oppressed? Do you find yourself sniffing in rancid odors without a clear source? Has your body suffered mysterious bruises, sometimes in the shape of a goat’s hoof? Are you a white person? If the answer to all or any of these questions is a resounding yes, then according to British occultist Dion Fortune, you’re very likely the victim of a psychic attack. Before ascending to a plane higher than our own in January 1946, Fortune was benevolent enough to leave behind some two dozen books, one of which includes the indispensable 1930 manual Psychic Self-Defense.

In her day, Fortune was one of the best-known occultists in the United Kingdom. Born to a wealthy English family in Wales under the name Violet Mary Firth in 1890, Fortune became interested in the Theosophical Society while working at a psychological clinic. After quarreling with her friend Moina Mathers, Fortune quit Mathers’ Alpha et Omega group and established her own society of quacks, the Fraternity of the Inner Light. (An organization you can find on the internet and still join today.) Fortune claimed to have visions and psychic powers, so naturally, she was a perfect candidate for writing something like Psychic Self-Defense. She was even the target of an attack herself once.

When she was 20-years-old, Fortune worked for a nasty boss who terrorized her employees “by means of her knowledge of mind-power.” When this woman, Lillias Hamilton, suddenly fired an employee without paying him, the man took her to court. Hamilton tried to manipulate Fortune into supporting her case, hypnotizing the poor young woman and using her psychic powers to force Fortune to take her side. After one interrogation, Fortune felt so mentally and physically drained that she slept for fifteen hours.

When Fortune got tired of Hamilton’s abuse, she confronted her boss and told her that she was going to quit. In retaliation, Hamilton managed to keep Fortune in place for four hours, telling her several hundred times that she was incompetent and had no self-confidence. Having these words drilled into her head put Fortune into a daze, and she mindlessly laid in bed for over thirty hours before a housekeeper started to keep an eye on her. She lost her appetite, and had no desire but to stay in bed.

This aimlessness lasted for days, until finally, Fortune’s family came and took her away. In the preface of Psychic Self-Defense, Fortune wrote that, during the attack, she had “physical symptoms of intense fear. Dry mouth, sweating palms, thumping heart and shallow, hasty breathing. My heart was beating so hard that at each beat a loose brass knob on the bedstead rattled.” At the time, Fortune had no idea she was suffering from a psychic attack, and it wasn’t until she became involved with occultism years later that she fully recovered and became aware of what had happened to her.

Fortune didn’t believe that her boss was the only one who could use their psychic powers for evil. “I am of the opinion,” she confessed in the preface, “that psychic attacks are far commoner than is generally realised, even by occultists themselves. Certainly the general public has no conception at all of the sort of things that are done by people who have a knowledge of the powers of the human mind and set to work to exploit them.” Throughout the book, she gives examples of other supposedly real psychic attacks, tying the phenomenon in with vampires, witches, and hauntings. It’s absolute nonsense, but quite fun, and some of the cases she discusses are pretty bizarre.

In a chapter entitled “Vampirism,” for example, Fortune discussed an episode she heard from a student at the psychological clinic where she once worked. After a young man called Z. became roommates with the student, dogs in the area would bark and howl at the same time every evening. A specific window in their apartment would then fly open, and the apartment would become cold. On one occasion, an invisible being flew into the building. After getting rid of the thing, Z. admitted a peculiar relationship with his cousin D. This particular man was a World War I soldier who was discharged after practicing necrophilia on the battle-field. It was believed that D. was psychically attacking Z., and that the war veteran himself was also under the influence of a vampire.

But I digress: How do you actually defend yourself against a psychic attack? For starters, Fortune recommended that victims get as much sunlight as possible. They should avoid the countryside, large bodies of water, and walking alone, because solitude can increase the risk of suicide. Important “psychic centres” such as the head and solar plexus should be kept closed, since they’re easy entry points for psychic influence. But most importantly, ” the bowels should be kept freely open while facing a psychic attack, because there is nothing that puts one at so great a disadvantage as the accumulation of effete matter within the body.” Such measures won’t entirely protect a person from a psychic attack, but they’re great methods of resistance, and can help a victim endure until the attacker runs out of energy.

Another technique is to take a bath in consecrated water. Meditation can also be useful, along with creating magical circles, which can protect the victim’s sleep-place. Alternately, there’s a kind of “mystic superconsciousness” or “Higher Self” that Fortune thought could be activated as a kind of guardian angel in the crisis of a psychic attack. A person’s Higher Self can guide them to safety, away from the site of the psychic attack. In Fortune’s words, “…in times of spiritual crisis the man that has faith in the law of God can rise up and invoke its protection and a seeming miracle will be performed for his benefit.”

Follow these guidelines and you should be fine. To reiterate: when you’re out having fun this weekend, don’t walk alone along a lake in the countryside under any circumstances. Keep your bowels open. Be sure to meditate every once in a while. And last, but not least, keep your Higher Self on the ready in case any wizards, vampires, or New Age cat ladies attempt to telepathically beat you up.

If you enjoyed reading this article, please consider supporting my blog by buying my book, “20 Unsolved Mysteries of Japan,” available here on Amazon.

4 thoughts on “The Idiot’s Guide to Psychic Self-Defense”