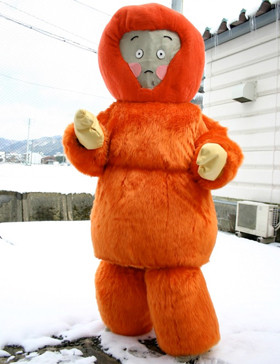 Uncensored photo of a real-life Hibagon

It’s a general fact of the world that every culture must have at least one story of a hairy ape-like creature. We’re all familiar with Bigfoot and his snowy cousin the Yeti, and we can find more far-fetched tales of their relatives from across the globe. The Chinese have encountered and killed various Yerens, for example, while people in India have been terrorized by a monkey on a skateboard. In the United States, we have the Skunk Ape, the Fouke Monster, and so many other Bigfoot clones that one might presume the entire country was inhabited by ape-men.

Japan is no exception to this universal law. Its fantastical hominid, the Hibagon, is a big-nosed, dark-furred monster that stands on two legs at the height of five or so feet. It’s said to live around Mount Hiba, a mountain in Hiroshima Prefecture that can also boast of being the burial site of the goddess Izanami. The first sighting of the Hibagon, according to the Japanese site Occult Chronicle, dates back to July 20, 1970.

On that morning, a man with the last name of Marusaki spotted a strange creature while he was passing through the town of Saijo in a truck. The critter stared at Marusaki, made its way across the road, and then vanished into a forest. Initially, Marusaki thought the jaywalker was an ape. Three days later, a farmer cutting his grass saw a similar creature watching him from some brush. The farmer said that the monster had a human-like face. Speculations linked the peeping tom to Marusaki’s ape, and soon enough, the legend of the Hibagon was born.

In December 1970, there were a dozen sightings of the Hibagon. The ape was strolling so freely, in fact, that some people discovered its footprints in the snow. By April 1971, the Hibagon’s fame inspired the enterprising Saijo authorities to set up the Ruijin’en Kakari, a name my clunky Japanese would render as the “Ape Staff” or “Ape Officials.” This committee investigated sightings, interviewed witnesses, and assisted with the publicity the monster was bringing to the small town. Interviewees were apparently paid 5,000 yen (about $46) for their testimony.

As the stories of the Hibagon were printed across Japan, curious travelers came to Saijo for a chance to see the creature. One group, dispatched by Kobe University, failed to uncover any proof that the Hibagon existed. For a few more years, the mythical ape continued to grace the townspeople, however, with sightings most frequently occurring in the summer.

A dubious 1974 picture of the Hibagon

The year 1974 marked the peak of the Hibagon. In August, a man driving with his mother in a town near Saijo saw the Hibagon flee into some trees. Realizing his find, the man grabbed his camera, got out of the car, and snapped a picture some twenty feet away. The resulting image was a shadowy figure standing in foliage. Unfortunately, as you can observe above, we can’t even see the Hibagon’s lovely smiling face. Still, while some believers were titillated by this picture, other witnesses disputed that it was the Hibagon at all.

By the end of the year, the Ape Staff had received tips about 100 sightings since the committee’s establishment. 22 of these reports were testimonies, from the mouths of 33 different people. From this body of evidence, the Hibagon was judged to be slow, harmless, and intelligent. Its face was like an inverted triangle, and its fur was either brown or black in color. Although not everyone agreed that it was like a monkey, a lot of witnesses, including a woman who spotted it near her house in July 1974, identified it as being similar to an ape.

After creating such an uproar, the Hibagon completely disappeared after October 1974. The Saijo authorities disbanded their committee in March 1975, believing the issue was still inconclusive. Mysterious Universe notes that the Hibagon was detected in other parts of Hiroshima in the early 1980s, but these sightings were just as short-lived as the original wave around Saijo. Today, the Hibagon is a familiar sight around the town (now a part of the city Shobara), but exclusively in the form of pictures, costumes, and merchandise. The curious gourmet can even sample Hibagon eggs, a treat made of cocoa, bean paste, and sweet potato flavors.

Fifty years later, can we really say that there was a benign, jaywalking ape hiding in the forests of Japan? Doubters have suggested that the Hibagon was a misidentified animal, like a Japanese macaque or an Asian black bear. Perhaps one of these animals ventured away from the forest or mountain, and was separated from the rest of its fellows. Some witnesses claimed that the Hibagon had white on its hands or hip, a feature that I wonder might have been confused with the Asian black bear’s signature white chest.

At the time of Hibagonmania, the area around Hiba Mountain was also being developed, an act that must have interfered with local wildlife. Cynics have additionally taken note of the Saijo government’s unusual involvement with the Hibagon sightings in the ’70s, which included paying witnesses for their help. The mayor of the time, according to Japanese blogs I read, was eventually arrested for taking bribes from a construction company. Might the whole episode have been a ruse by officials to spark interest in a newly-developing tourist spot? It’s a question to ponder, preferably while eating Hibagon eggs.

If you enjoyed reading this article, please consider supporting my work by buying my book “Forgotten Lives” on Amazon here. My first collection of short stories includes such sweet tales as “The Society for the Preservation of Vice,” in which a group of decadent artists attempt to pull off a human sacrifice, and the heart-warming “A Gourmet’s Confession,” in which a glutton resorts to cannibalism after he can’t eat conventional food anymore. Due to my state’s COVID-19 shutdown, I am currently out of work, so I would greatly appreciate the support. A review, witty condemnation, or political manifesto posted on its Amazon page would also be wonderful.