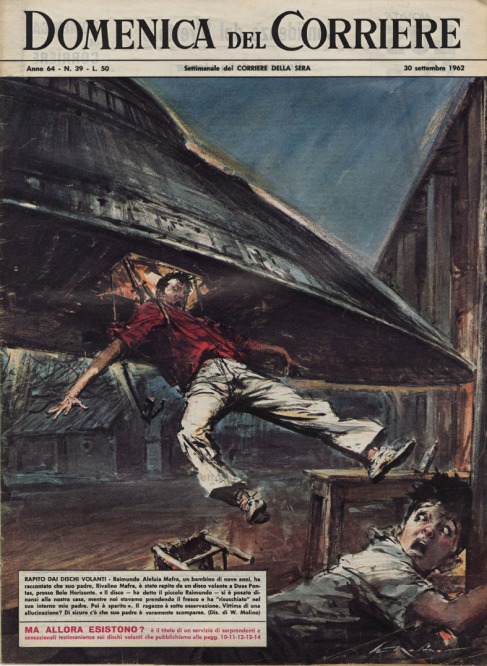 Rivalino Mafra da Silva was a Brazilian diamond prospector who lived in Diamantino, a town in the southeastern state of Minas Gerais. Rivalino’s wife had died in 1961, and he raised his three sons Raimundo (12-years-old), Fatimo (6-years-old), and Dirceu (2-years-old) by himself in a shack. On August 19, 1962, the family was woken up during the middle of the night by a shadow in their shared bedroom. According to Raimundo, the shadow was “half the size of a man and not shaped like a human being.” It quietly moved through the room, looked over the Mafras, and then left their house.

After the shadow left, the Mafras heard voices and footsteps coming from outside. One of the voices said, “This seems to be Rivalino,” and then Rivalino jumped out of bed and went into the living-room. He asked the voices who they were, but they refused to identify themselves. They told Rivalino that they were going to kill him. Eventually, the voices stopped and seemed to have left, but the Mafras couldn’t sleep after this incident. They were so scared that they prayed all night.

In the morning, while fetching his dad’s horse, Raimundo saw two ball-like objects hovering in the air near the family shack. One of the objects was entirely black in color, the other was black and white. Both objects had antennae and tail-like appendages. They also made humming noises, and flashes of light or fire came out from their backs.

Raimundo shouted for his father, and when Rivalino came outside, the two objects combined into one ball and released a yellow smoke. The smoke covered Rivalino and filled the air with a terrible odor. When the smoke cleared a minute later, Rivalino and the ball-like object were gone. Raimundo looked all over for his father, but couldn’t find him. He ran to the local police station and reported what happened. When the police searched the Mafras’ shack, they found drops of human blood, although it couldn’t be determined whether it belonged to Rivalino.

Drawing by Raimundo of the objects he saw.

Naturally, the authorities didn’t buy Raimundo’s incredible story. They suspected that he killed his father, or perhaps was covering up for the murderer. Joao Antunes de Oliveira, a psychiatrist, thought that Raimundo was perfectly sane. He seemed to truly believe that he saw a ball-like object abduct his father. The police didn’t buy it though. In a cruel trick, they covered a (still living) volunteer with a sheet and told Raimundo that it was Rivalino’s dead body. Raimundo still refused to take back his account. In tears, he insisted that the story was true and that the ball must have returned his father.

While some believed the boy, other residents sided with the police. Elagmano Marques da Costa, a businessman in the area, thought Mafra ran off and abandoned his sons. One popular rumor suggested that he was murdered. Perhaps Raimundo saw the shadows and voices of the murderers, but hallucinated the rest of the incident due to shock. While he might have been deemed sane, Raimundo wasn’t in the best of health. He was badly malnourished, illiterate, and couldn’t even read a clock. Interestingly, Raimundo related the same story over and over. His account is said to have never changed, perhaps confirming the psychiatrists’ observation that he believed what he saw. (Or, if you will, the veracity of Raimundo’s testimony.)

Five days after his father’s disappearance, Raimundo gave an interview to the press. The next day, an article about the story appeared in the newspaper Diario de Minas. A Rio de Janiero-based paper, Tribuna da Imprensa, covered the case on August 29. In a September article for The A.P.R.O Bulletin entitled “Man Kidnapped by Globes,” Olavo T. Fontes translated Raimundo’s press interview, the first report of the case in English-speaking media. Many other articles and books, as listed here, have since covered Rivalino Mafra da Silva’s disappearance, but with distortions and inaccuracies.

One common piece of apocrypha, missing from the earliest sources, concerns alien dwarves.  Slightly before Rivalino’s disappearance, two of his co-workers are said to have seen a pair of three foot-tall beings while walking past his house. The dwarves were digging a hole, and when spotted, ran into the bushes. A red UFO then emerged from the hiding spot and took off into the sky. Others claim that it was Rivalino himself who saw the dwarves.

Many English sources also neglect the fact that Rivalino’s body might possibly have been found. In October 1963, A Estrela Polar reported that a group of hunters found bones near Rivalino’s house in “a place of difficult access.” Due to the belt that was found with the remains, along with the location, the body was identified as Rivalino’s. Of course, some have questioned whether the bones really were Rivalino’s, but this was enough to (partly) satisfy the foul play theory. To my knowledge, however, nobody could come up with the names of the murderers.  Whatever exactly happened to the Mafra boys after their father’s disappearance is also obscure; Raimundo is said to have died in 2001, and the whereabouts of Fatimo and Dirceu are unknown.