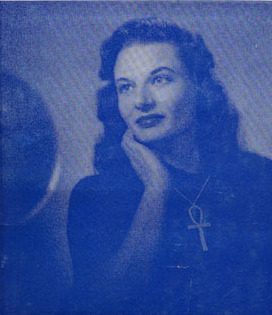 A picture of Gloria Lee from her first book, “Why We Are Here.”

In September 1953, 28-year-old Gloria Lee began to hear a strange voice in her head. Fortunately, the voice didn’t claim to be a manifestation of schizophrenia, but a telepathic communication from Jupiter by an alien named J.W. (The Jovians were so utterly advanced that they had no use for names or vocal cords.) Lee, an airline stewardess who had a great interest in UFOs, was understandably thrilled with her psychic visitor. She’d heard stories from pilots and other stewardesses about flying saucers, but in her five years of experience had never actually seen one herself.

Imagine Lee’s disappointment, then, when J.W. refused to physically show himself to her. “Frankly,” she wrote in her first book, I was just plain disgusted J.W. didn’t “drop in for a visit” if he was who he said he was.” For months, Lee decided to ignore J.W., until one day she was hanging laundry outside her home in Westchester, California and suddenly heard a voice telling her to look up.

Not sure what to expect, Lee followed the command, and spotted a giant UFO flying northward. After hearing there were other witnesses who saw the object in near-by Redondo Beach, Lee’s faith was restored, and she took up talking to J.W. again. To further develop her powers, Lee also attended a “psychic development” class. Lee never claimed to have physically met or seen J.W., but a classmate did once sketch his picture after supposedly seeing him stand behind Lee in class.