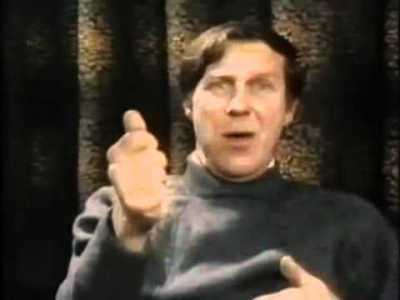 Picture of Rev. William Booth Gill from a TV interview available on Youtube.

On the evening of June 26, 1959, an Anglican missionary named Rev. William Booth Gill was walking out of his house in Boainai, Papua New Guinea when he noticed a bright sparkling object in the sky. For the next four hours, Rev. Gill took notes and watched the light with more than 30 other witnesses. When it disappeared after 45 minutes, it came back with three smaller objects an hour later. This “mothership” flashed a blue light from the center of its deck, and the object was so close that Rev. Gill and the other observers could see four figures on top of it. By 11 PM, the ships had vanished, and a heavy rain began to fall from the sky.

The next night, Rev. Gill and some other missionaries saw the mothership near the same location of the first sighting, along with two other smaller UFOs. The four figures on top were again visible, and when Rev. Gill waved to one of the them, the figure waved back. Ananias Rarata, a native schoolteacher, began to wave too, and all four of the figures waved back for the next couple of minutes until they decided to go below deck. After a half hour, Rev. Gill left to go to dinner, and the other observers left to go to church. Nobody saw the UFOs for the rest of the evening, although there was an inexplicable explosion sound heard around 10:40 PM. 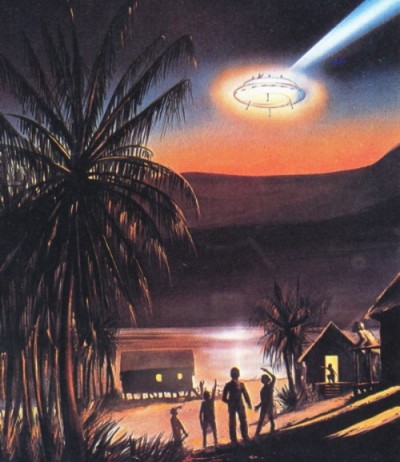 The official conclusion was that Rev. Gill was a “reliable observer”, but that the incidents were probably nothing more than “natural phenomenon coloured by past events and subconscious influences of UFO enthusiasts.” Doubters thought that the objects were Jupiter, Saturn, and Mars, and the “human shapes” were explained as “various cloud densities”.

Others thought Rev. Gill had made the story up entirely. Dr. Donald H. Menzel, a Harvard astronomer and notable UFO debunker, accused Gill of manipulating the testimony the “uneducated” natives had given. He also thought Rev. Gill wasn’t wearing his glasses at the time, and claimed that the position of Venus was left unmentioned in Gill’s reports. J. Allen Hynek, another astronomer and the head of the Center for UFO Studies, rebuked Menzel, and noted that Rev. Gill was wearing his glasses at the time and had, in fact, identified Venus in his reports.

Before his sightings, Rev. Gill initially considered himself a skeptic. There had been sightings of strange lights across Papua New Guinea since the past year, some of which had been reported by missionaries. In a letter written the day before his first sighting (but never seen sent), Rev. Gill told his friend Rev. David Durie that he believed UFOs were “more likely some form of electric phenomena- or something brought about by the atom bomb explosions etc.” 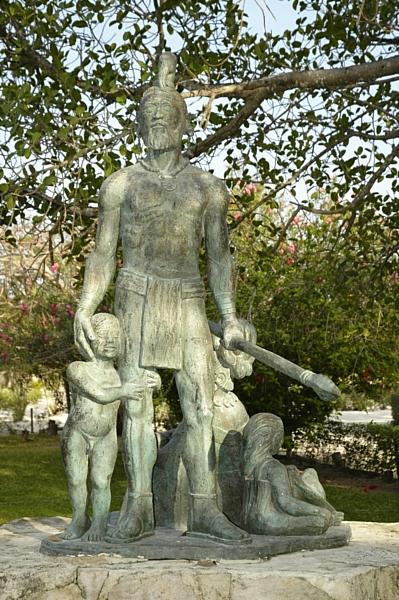 Gonzalo Guerreo was a soldier from Spain who had come to the New World in hope of becoming a conquistador. His life, however, ended up taking a completely different turn when he became stuck on the Yucatan Peninsula after a shipwreck in 1511. Guerrero and the rest of the survivors, including a priest named Geronimo de Aguilar, were captured by a Mayan tribe and forced to become slaves.

Eventually, all of the captives except Aguilar and Guerreo died. Both of the men assimilated into the local culture and learned the Mayan language, although Aguilar was reluctant to abandon his Spanish roots. He continued to practice his priestly duties, and refused to marry or sleep with any Mayan women. The tribe’s leader, amused by the faithful priest’s chastity, put Aguilar in charge of his harem. 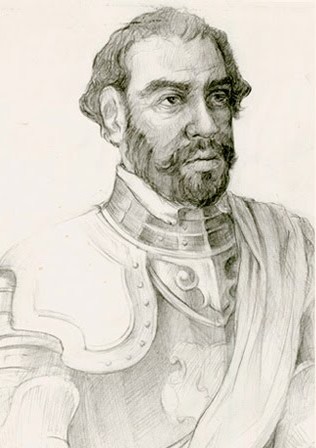 Guerrero, on the other hand, was eager to adopt every aspect of Mayan life. He was well-respected by his captors, and especially impressed their leader Nachan Can. After Guerrero became a free man, Nachan Can made him an army captain and gave Guerrero his daughter’s hand in marriage. The couple had three sons, possibly the first mixed-race children born in the Americas.

Hernan Cortes, while passing through the area in 1519, learned about the two white men and sent them a letter. Aguilar was eager to leave and reached Cortes’ ship by paddling a canoe. Because he was wearing Mayan clothes, Cortes was skeptical that Aguilar was a Spaniard. In a language he hadn’t used in years and years, Aguilar suddenly shouted in Spanish and was then let on board. To avoid any conflict, Cortes bought Aguilar off the Indians for only a couple of glass beads. 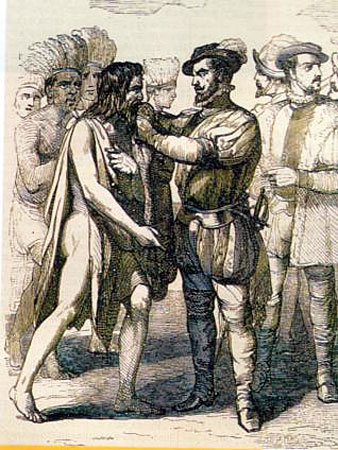 Guerrero, content with his new life, refused to go back to the Spanish forces. He said that he was happy living with the Mayans, and loved his children and wife far too much to leave them. When his fellow Spaniards started their conquest of the Americas, Guerrero fought against them in several military campaigns and ultimately died on the battlefield. His former countrymen condemned him as a traitor, and he languished in obscurity for several centuries until he was reappraised by Mexican intellectuals in the late 20th century.

With the help of Geronimo de Aguilar, Cortes now had the service of a translator. Shortly afterward, to add to his luck, he was given a young female slave named Malinche by the Tabascan Indians. Malinche could speak both Mayan and Nahuatl, the language of the Aztec Empire. She could translate what she heard in Nahuatl into Mayan, which Aguilar could then translate into Spanish for Cortes.

After the Conquest of the Aztecs, Aguilar finally gave in and married an indigenous woman named Elvira Toznenetzin. They had two daughters, and Aguilar is believed to have died sometime in 1531.