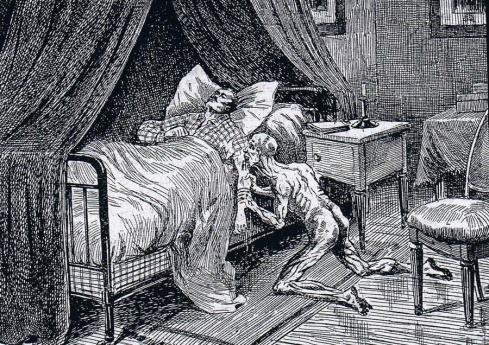 In American pop culture, vampires are frequently charming, sexy, and sophisticated. They’re rarely scary, and since the vampire romance boom, they’ve become lame and boring. If hideous, evil revenants ever become fashionable again, then I can only hope writers and filmmakers might explore the vrykolakas, a Greek cousin of sorts to the Slavic vampire. Like the vampire, the vrykolakas is a pale, undead corpse that terrorizes the living at night. While it doesn’t typically drink blood, the vrykolakas is capable of turning other people into its ilk.

Instead of biting people’s necks, however, the vrykolakas has a more sanitary method of infection. It appears at a victim’s house, knocking on the front door and calling the person’s name. If you’re polite enough to answer the door, you’re unfortunately fated to die and become a vrykolakas yourself. Even if a person dies naturally, they’re at risk of turning into a vrykolakas if they’ve been excommunicated or buried in unconsecrated ground. Interestingly, the word “vrykolakas” originally meant werewolf. This accounts for the blurring between the two in some folk beliefs, and the beautiful idea that a werewolf can become a vrykolakas after it dies.

It’s hard to say when exactly a party of drunken Greeks might have come up with the creature. It doesn’t appear in ancient or Byzantine texts, and only first pops up in the written word around the 15th century. Greek scholars like the Vatican librarian Leo Allatius wrote about the vrykolakas, while foreign travelers and observers also recorded stories. A detailed account of an alleged vrykolakas, along with the hysteria it provoked, comes from the French botanist Joseph Pitton de Tournefort (1656-1708). While island-hopping through Greece in search of plants, Tournefort happened to stay in Mykonos during a vrykolakas attack.

According to the skeptical Tournefort, the vrykolakas was a quarrelsome peasant who’d been mysteriously murdered in a field. Two days after his burial, the peasant was seen taking nightly strolls. Over the course of his solitary entertainment, the new vrykolakas “came into houses and turned over furniture, extinguished lamps, embraced people from behind, and played a thousand little roguish tricks.” The townspeople thought this was hilarious, but the vrykolakas was treated more seriously when the town’s elites began to complain. On the tenth day after the vrykolakas’s burial, the town’s religious and secular authorities ordered for an exorcism to take place.

The exorcism was held in a chapel, attended by many of the townspeople. The vrykolakas’s unconscious body was carried there, and a mass was held to expel the demon thought to be possessing the corpse. To the disgust of Tournefort and his party, the town butcher was tasked with cutting out the monster’s heart on the spot. As the corpse was dissected, its body released a stench so horrible that it whipped the onlookers into panic. Incense that was burned to hide the smell only made things worse. Some townspeople shrieked “Vrykolakas!” over and over, while others insisted that the smoke from the incense was actually coming from the corpse’s body. Even the butcher was affected, claiming that the dead man was still warm.

Despite (or because of) this intervention, the vrykolakas only became more troublesome. The townspeople now accused him of “beating people at night, of breaking in doors, and even roofs; of breaking windows, tearing up clothes, and emptying pitchers and bottles.” People were so afraid of night-time that families slept in the town square, while others fled for the countryside. Everyone debated what to do, questioning if something went wrong with the exorcism. Meanwhile, the town’s holy men fasted and dispensed holy water, covering doors with their blessed H2O.

As a man with a scientific bent, Tournefort was not convinced that anything supernatural was going on. At the exorcism, the Frenchman and his companions informed their Greek hosts that the vrykolakas’s body was quite dead. None of Tournefort’s party, in fact, witnessed the vrykolakas in the middle of its shenanigans. The tall tale might nearly have been put to rest when a couple of vagabonds were rounded up and arrested for the mischief. For some reason, the vagabonds were let go after two days, and once again, terrified citizens complained about somebody drinking and emptying their wine jugs.

Finally, with the town in such an uproar, the authorities concluded that desperate times called for desperate measures. Since pouring holy water into the vrykolakas’s mouth didn’t work, and sticking swords in its grave wasn’t much help either, somebody came up with a wiser solution. On January 1, 1701, the vrykolakas was moved to St George Island, where it was thrown onto a pyre and set on fire. The monster’s body burned quickly, and that was the last anybody saw of the vrykolakas. It never bothered the people of Mykonos again, with the result that several songs were written in honor of the island’s victory.

If you enjoyed reading this article, please consider supporting my work by buying my book “Forgotten Lives” on Amazon here. My first collection of short stories includes the company of such wonderful people as a vengeful circus dwarf, a gourmet cannibal, and a mother who convinces her daughter that aliens are coming to abduct them. The book was just released on Kindle today, so I would recommend getting a copy before a vrykolakas shows up at your front door. 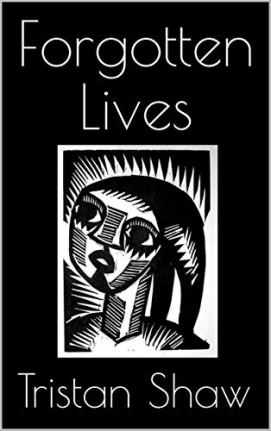