Comic book depiction of the Sagrada Familia Cyclops, an alien encountered by three boys in Brazil in August 1963.

On August 28, 1963, 7-year-old José Marcos Gomes Vidal went to play with his friends Fernando and Ronaldo Gualberto at their home in Sagrada Familia, a poor neighborhood in Belo Horizonte, Brazil. Around 7 PM, after eating dinner, the boys went out to the backyard to wash a coffee strainer. While Fernando stood a small distance behind him, José dipped his head and arms into a barrel to collect some water. (I believe Ronaldo was hanging around the side of the house, away from the other two boys.)  Suddenly, Fernando noticed a glow coming from the top of an avocado tree. When he looked up, he saw a UFO hovering above the tree’s branches.

The craft, which was spherical and had a pair of antennas on top, was completely transparent. It held four human-like passengers sitting inside, one of whom sat in front of a machine that appeared to be a control panel. The passengers were about six feet tall and dressed in spacesuits. They all four had only one eye. Three of them were thin and bald, while the other looked like an overweight woman with blonde hair. 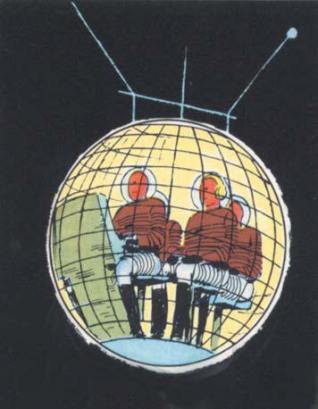 As Fernando gazed at the sight in awe, the UFO shot out two rays of yellow light. One of the cyclopes then appeared between the lights, slowly floating down onto the ground. Once his boots touched the earth, the creature began to walk toward José, who was completely unaware of what was happening since he was still collecting water. Worried that the cyclops was going to abduct his friend, Fernandos panicked and tackled José. José fell to the ground, and Fernando got back up and faced the cyclops. Now all three boys were aware of their visitor.

Instead of moving any farther, the cyclops moved his head and made hand signals. Its mouth moved and spoke a few sounds that was nothing like the boys ever heard before. The creature then turned around and stared back at the UFO. Fernando, spotting a brick on the ground, picked it up and aimed it at the cyclops. The cyclops suddenly faced the boys again and shot Fernando’s hand with a yellow light from a triangular crest on his chest. Fernando dropped the brick, and all three of the boys became calm and frozen. 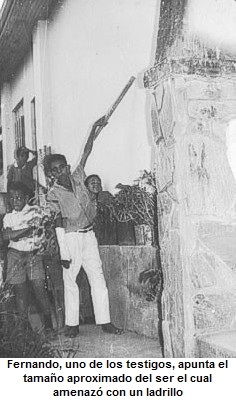 A newspaper photo of Fernando using a stick to show how tall the cyclops was.

The cyclops spent the next few minutes talking to the boys in his language. The boys didn’t understand anything that the cyclops said, but he sounded like he was serious. After pointing one of his fingers at the moon, the cyclops began to walk back toward the UFO. (One source places Fernando’s attempt to hit the creature with a brick at this later point.)

As the cyclops walked away, José asked if he would ever come back. He shook his head affirmatively, plucked a plant from the ground, and then waved his hand at the UFO. The UFO shot out two rays of yellow light again,  and the cyclops slowly floated back up into the vehicle. As the boys continued to watch, the UFO flew eastward and disappeared out of their sight.

After the UFO was gone, a wave of fear settled over the three boys. José ran into the Gualbertos’ house and hid under a bed. Fernando and Ronaldo were also badly spooked, and told their mother María José about what happened. She sent a neighbor girl to fetch her husband, Alcides, from the bar. When Alcides returned home to check the backyard, he found large footprints, like those of a boot, near the water barrel. José and his friends reportedly never saw the cyclopes again. While the case was at one point investigated by a Brazilian ufologist, it has remained mostly unknown to the wider world. 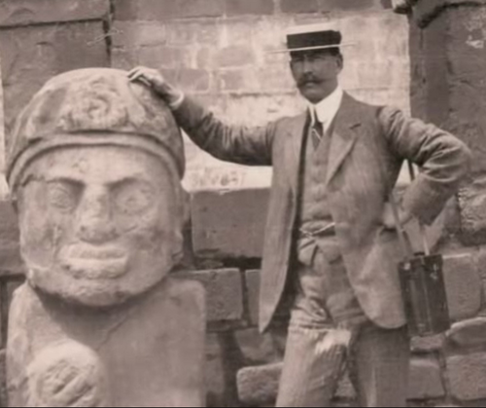 Percy Fawcett with an Olmec (?) statue.

Colonel Percy Fawcett was one of the most famous British explorers of his day, a friend of writers Arthur Conan Doyle and H. Rider Haggard. He had a strong interest in Atlantis and the occult, and after years of exploring South America, speculated that the ruins of a lost ancient city called Z laid somewhere in the unmapped territory of the Amazon.

Fawcett believed the city was built by an advanced civilization, once writing to his son Brian that he expected “the ruins to be monolithic in character, more ancient than the oldest Egyptian discoveries. Judging by inscriptions found in many parts of Brazil, the inhabitants used an alphabetical writing allied to many ancient European and Asian scripts.” He even heard rumors that a strange source of light would illuminate the insides of the buildings, “a phenomenon that filled with terror the Indians who claimed to have seen it.”

After two previous expeditions in the early 1920s that ended in failure, Fawcett set out for a third expedition with his 21-year-old son Jack and Jack’s friend Raleigh Rimell in 1925. Fawcett suspected that Z was located somewhere in the jungles of Mato Grosso, a little-explored region full of dangerous insects, unfriendly Indian tribes, and piranha-infested rivers.

By May 29th, about 5 weeks into the expedition, Fawcett and his two young companions arrived at the outpost where Fawcett had left off in his last search. He gave their native guides a letter written for his wife, and then dismissed them back to the state capital of Cuiaba. 2 years passed without anybody hearing from the team again, and some began to fear that they were dead.

The Royal Geographical Society’s George Miller Dyott organized an expedition to find the Fawcett party in 1928, but they came up with nothing. There were rumors that the trio was still alive, either the captives of hostile Indians or volunteers who had given up civilization and gone native. In the 90 years that have passed since their disappearance, over 100 people have been killed trying to look for them. 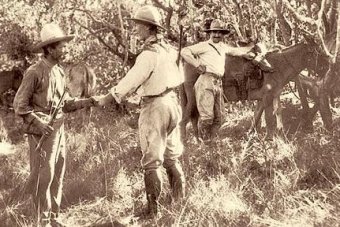 Another picture of Percy Fawcett.

Missionaries in the early 1930s reported hearing stories about a tall, blue-eyed white man in the area who was forced to marry an Indian chief’s daughter. There were also sightings of a white baby boy said to be the son of either Fawcett or Jack. Fawcett’s wife believed that the men were still alive, and claimed to have received a psychic message from her husband in 1934. Psychic Geraldine Cummins also reported receiving a telepathic message from Fawcett in 1936, and received four more communications until 1948, when he told her that he was dead. Further venturing into inanity, some people in the theosophist and flying saucer communities believed that Fawcett really did find Z, which was actually a subterranean city full of UFOs and beautiful red-haired people. 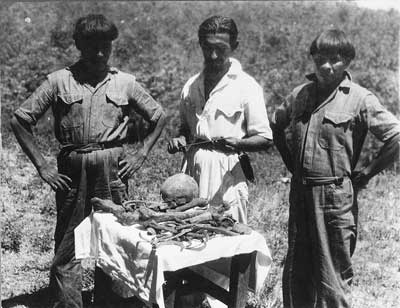 These bones were said to be the remains of Percy Fawcett, but later investigation showed that they belonged to a Kalapalos Indian.

Moving onto more “plausible” rumors, there were also stories of Fawcett being killed. One man in 1949 claimed that Fawcett and Rimmell were dead, and he had seen their shrunken heads. Author Harold Wilkins in 1952 heard that another man was shown Fawcett’s shrunken head by an Indian chief. The same year, Brazilian indigenous activist Orlando Vilas Boaz reported that the party was killed by the Kalapalo Indians. He discovered some bones in the area, but later examination showed that the remains weren’t Fawcett. Another theory suggests that Fawcett intentionally went missing so he could establish a remote theosophist-influenced commune.

Fawcett’s son Brian made several trips to Brazil in the 1950s to search for his father and brother himself, but he was unable to find any more information about what happened to them.

The lobishomen is a type of werewolf that appears in Portuguese folklore, most prominently in the southern region of Alentejo. It’s usually described as a typical werewolf, although others have said it looks more like a small, hunchbacked monkey. Explanations for how people become lobishomen varies across the country, from being the murder victims of witchcraft to being the children of parents who had committed incest. The most common explanation, however, is that a lobishomen is born if his mother has had seven (sometimes five) sons in a row. Daughters can become lobishomen too, although they are generally called “loberia”.

The victim’s life is completely normal until he’s hit puberty. For the next seven years, every Saturday night, the adolescent child has an unstoppable urge to quit whatever he’s doing and go out into the woods. He’ll then take off his clothes, fall to the ground, and transform into an ugly and oversized animal, typically a rabbit, wolf, or donkey. Immediately, he starts to run throughout the forest, and he can’t stop until the sun’s come up. According to some variations, he runs because he’s being chased by demon dogs.

Once the seven years are up, the victim finally becomes a lobishomen. During the daytime, he looks like any other man, but he’s very thin and has a yellowish tint to his skin. He continues to suffer an involuntary transformation every Saturday night, but now has an insatiable thirst for human blood. The curse is lifelong, although it can be broken if somebody draws blood from the lobishomen at the exact moment he is transforming. This is really dangerous, however, because humans can die if even a single drop of lobishomen blood falls on them.

The lobishomen legend is also found in Brazil, although it’s considered more of a vampire in that country. Unlike its Portuguese cousin, the Brazilian lobishomen doesn’t kill people, and only attacks women. Women who are bitten by a lobishomen then attack children and drink their blood. The only way to keep lobishomen away is to smear a paste made of Wolf’s Bane and sweet onion around doors, windows, and graves of people believed to be lobishomen.