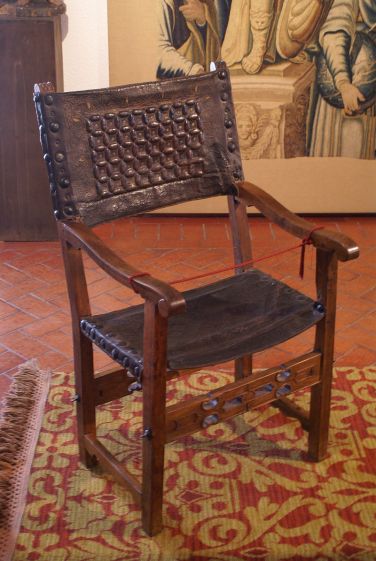 La sillon del Diablo, or “The Devil’s Armchair,” is a cursed chair that’s said to kill anybody who sits in it.

The Museo de Valladolid is a museum in the Spanish city of Valladolid that divides its collection into two sections, archaeology and fine arts. Among the museum’s collection, which spans the history of the city, you can find Roman coins, Renaissance-era paintings, and a 16th century chair associated with the Devil. “The Devil’s Armchair,” as this wicked piece of furniture is known, is said to be cursed.

According to legend, the chair’s original owner was Andres de Proaza, a 22-year-old student of Portuguese (some say Jewish) heritage. In 1550, Proaza was studying at the University of Valladolid’s Faculty of Medicine. He was enrolled in Spain’s first ever anatomy course, which was taught by Alfonso Rodriguez de Guevara, a renown physician who’d just come back from studying the subject in Italy.

For a subject that was just formally introduced to Spain, Proaza had an unusually deep understanding of anatomy. Everybody was impressed with his knowledge, and he was considered Guevara’s best pupil. His neighbors, however, were more scared than fascinated by the young man.

At night, they heard crying and moaning coming from Proaza’s house, and the stream behind his home was sometimes soaked with blood. Soon, a rumor spread that the promising anatomist was practicing necromancy. When a 9-year-old boy disappeared in the city, Proaza’s neighbors only grew more suspicious. They contacted the authorities to search Proaza’s house.

END_OF_DOCUMENT_TOKEN_TO_BE_REPLACED

Between March and June 1981, Tokyo’s red-light district was the sight of three unsolved murders, all of which occurred in love hotels.

Back in the 1980s, Akina Nakamori was one of the biggest pop stars in Japan. Compared to the other idol giant of the time, sweet goody two-shoes Seiko Matsuda, Nakamori sang gloomy songs about being a rebel and getting your heart broken. Recently, while exploring Nakamori’s back catalog, I heard a pretty catchy song called Shoujo A.

The title of the song literally means “Girl A,” but as one translator rendered it, it might better be understood in English as “Jane Doe.” In the Japanese media, for the sake of anonymity, names might sometimes be given as vague pseudonyms like Mr. A, Victim B, or Housewife C. In Nakamori’s song, the 17-year-old narrator calls herself Shoujo A, a nobody who isn’t special and can be found anywhere.

Now legend has it that Shoujo A was inspired by a series of unsolved murders in Tokyo’s infamous red-light district, Kabukichou. These murders, which all might have been committed by the same man, happened a year before the song’s release. The third victim was known as Shoujo A, and like the narrator of the Nakamori hit, was only 17-years-old.

Regardless of whether this is true or not, the story behind the rumor is an interesting one. Between March and June 1981, three women were killed in different love hotels in Kabukichou. The first body was found on the morning of March 20. The victim, Hostess A, had checked into the room with a young man the night before.

When it was coming time for check-out, the room didn’t answer the hotel’s calls. An employee sent to go check the room found Hostess A dead and alone. The cause of death was strangulation. A business card, belonging to Hostess A, identified her as a 33-year-old hostess at a local cabaret.

The name on the card, however, turned out to be a fake one.