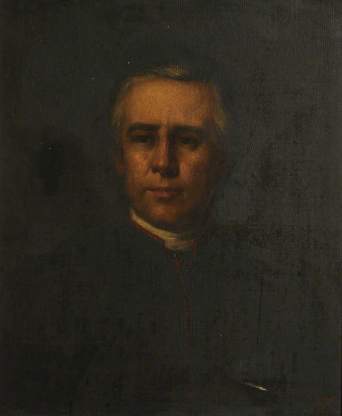 Today’s article is an account from Frederick George Lee’s 1885 “Glimpses in the Twilight: Being Various Notes, Records, and Examples of the Supernatural.” Lee was an English priest who believed in ghosts and wrote several books about the supernatural. He recorded this story, verbatim,  from the member of a Buckinghamshire family called Hickman. Unfortunately, the narrator gives us no date, but I assume it happened in the earlier part of the century.

My grandfather had a favourite daughter. She was his youngest child, had been born about ten years after the birth of his youngest son, and to her he was devotedly attached. The loss of his wife when his youngest daughter was about sixteen years of age, seemed to deepen and strengthen the affectionate attachment in question.

He himself is said to have been a very hard-headed, unromantic, anti-sentimental man, who had been largely influenced by the Scotch philosophers of the last century in rejecting the revealed religion of Christ; and during the latter part of his life, with a habit of sneering and cynicism, appears to have given up any belief in God, the soul, or immortality.

He was, however, reputed to have been a person of great integrity and good principles; living an upright life, respected by his friends, and a good friend as regards things temporal to his poorer neighbors.

The daughter in question, going with others to an outdoor party in one of the most beautiful parts of Buckinghamshire, not far from Wendover, rambling far from headquarters, was with several others overtaken by a storm, caught a severe cold, went home, took to her bed, and in less than ten days was buried in the village churchyard.

The young girl in question was very fair both in form and features; and friends who came to see her in her coffin said that she had never in all her life looked more beautiful. She was interred in the family vault amid the tears of her relations, and to the intense grief of her sorrowing parent.

Her father was inconsolable at his loss, the more so as he knew nothing of the consolations of religion, having long ago rejected them, and fretted much at what he looked upon as the stern decrees of Fate.

The night after the funeral he is said to have had a most vivid dream. He dreamt that his daughter was confined in a cold and narrow underground cell, and that two resolute jailers were slowly filling her mouth with small pieces of cotton wool, in order to forcibly suffocate her; but that in the greatest trouble and agony she continued to resist, and would not be suffocated.

The dream disturbed him considerably; but, on waking and thinking over it, he acknowledged that his recent loss had no doubt served to disorganize his stomach, to confuse his brain, and to give rise to such fantastic fancies of the night.

However, a similar dream was had on the following night, and a third to his great astonishment on the night succeeding. His mental anguish and stress became so great that, at sunrise on the third day he rose from his bed, and went off to the clergyman of the parish to narrate what had happened, and to ask his counsel.

The clergyman, who had not then risen, surprised at being roused so early, came downstairs, listened to the curious and affecting narrative, and at once advised the immediate opening of the vault. This was done at once, and the coffin examined.

Under further advice- that of a doctor from the country town, who was going his rounds to visit his patients- the coffin was opened, when, to the horror of all who witnessed what was then and there discovered, it seemed perfectly clear that the young girl had been buried alive.

It was obvious that she had been put into the coffin in a state of suspended animation or trance, and that since the burial (for the body was turned and twisted, the hands compressed, the nails being dug into their palms, and the face fearfully contorted), the poor creature had died of suffocation.

An inquiry which was held resulted in nothing that could either give consolation to the living or benefit to the dead. The bare and melancholy facts as here recorded were both undoubted and unquestioned. The father of the girl soon afterwards died of grief, wasted away from sorrowing; and, as some said, died of a broken heart.

Be sure to check back on Bizarre and Grotesque every Sunday and Wednesday for new articles, and don’t forget to hit those SHARE buttons down below!

3 thoughts on “A Warning Unheeded: A Victorian Account of Precognitive Dreams”