On October 30, 1979, the body of Robert Boulin was found in a pond in the forest of Rambouillet in southern France. Boulin, a Gaullist politician and veteran of the French Resistance during World War II, had not been seen since the day before, when he had gone out to lunch with his son. His car and an empty container of barbiturates were found near his body. Inside the car were some letters declaring his intention to kill himself.

A note he wrote to police, dated the day of his death, was received a few days later. Boulin wrote, “I have decided to drown myself in a lake in the forest of Rambouillet, where I enjoyed horse-riding.”

The autumn of that year, Boulin was embroiled in a real-estate scandal in which he illegally acquired five acres of land in the Rambouillet area. At that time, Boulin was the Minister of Labor, and was well on his way to becoming the next prime minister. The revelation of the scandal in the press, however, harshly tarnished his political career and reputation. According to the official account of his death, Boulin was so devastated that it drove him to suicide. The authorities closed the case quickly, attributing his death to drowning. 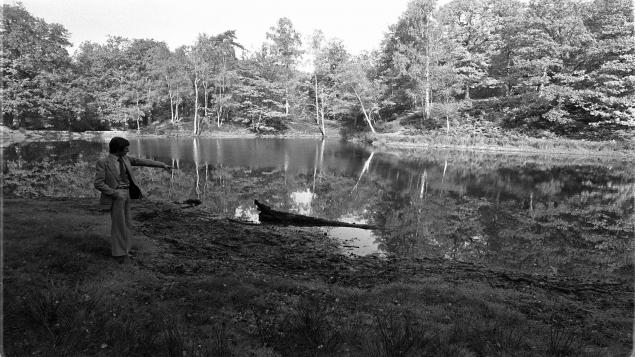 The spot where Boulin’s body was discovered.

Boulin’s family has publicly denied this. They’ve pointed out that the water he was supposed to have drowned in was only a foot-and-a-half deep. Furthermore, as was only recorded in a second autopsy that was conducted in 1983, there were “bruises around his wrists and a blood clot behind his head.” The judge in charge of the case asked for Boulin’s lungs to be checked to confirm that they contained water, but the jars storing the lungs inexplicably disappeared. Boulin’s family believe that his death was the result of foul play, and have accused his former Gaullist colleagues of plotting and covering up the murder.

After years of keeping quiet, the local policeman who first saw Boulin’s body came out publicly in 2011 with some new information. The officer, Francis Deswarte, reported that Boulin’s head was out of the water, and had red marks all over his face. Deswarte said that he was dismissed from the case only a half-hour later. Two or three months passed, and he was then called in for questioning by federal police, who ordered him to keep quiet about what he saw. When he asked about the red marks, they told him that Boulin’s body had been dropped by the firefighters who were taking it out of the water, despite that Deswarte himself saw the body being removed without a problem.

In light of this new information, no new investigation has been opened.

This article originally appeared on Bizarrepedia, a site full of interesting articles about serial killers, unsolved crimes, and other strange things.