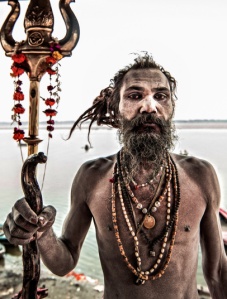 The Aghori are a small Hindu sect that worships the god Shiva. They are, however, reviled by orthodox Hindus for their use of alcohol and their meat-eating, which includes consuming the flesh of both animals and humans. They typically go naked or thinly-covered, but they also smear their bodies with cremation ashes. Like many other Hindu holy men, they are required to renounce life and earthly pleasures, so never marry and practice celibacy, although some Aghori have been known to engage in ritual group sex with menstruating prostitutes. In addition to their practice of cannibalism, they also drink urine and eat feces, no less from bowls made of human skulls.

Somewhat less sensationally, they don’t actually kill any of the humans they eat. They usually take bodies from the Ganges, a sacred river notoriously polluted with trash, industrial waste, and the bodies of poor Hindus whose families couldn’t afford to cremate them. (Most people in India are cremated.)

In their corpse-eating rituals, intoxicated by alcohol and hallucinogenic drugs, an Aghori first sits on the decomposing corpse, meditates for a while, and then dedicates the meal to a deity before eating it. They believe eating dead bodies will prevent aging and give them supernatural powers, like being able to fly or control the weather. These rituals aren’t believed to be a constant thing; some sources say they are only a once in a lifetime event. Because of the sect’s obscurity and secrecy, nobody is exactly sure, although they have allowed some filming of their rituals the past 10 years. 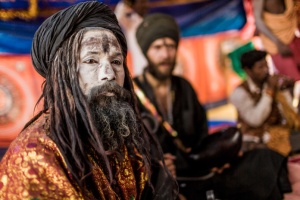 Another picture by Cristiano Ostinelli.

While they were recorded as having a population of 5,580 in the Indian Census of 1901, their number is far fewer today, some sources estimating only several dozen or so members. Little is known about their historical origins, although they trace their founding to a late 18th century ascetic named Kina Ram. There are some English accounts of the Aghori in the 19th century, including an incident in 1887 in which a nude gang of angry Aghori who had been denied some goats stole a corpse from a crematorium and ate it on the spot in the city of Ujjain.